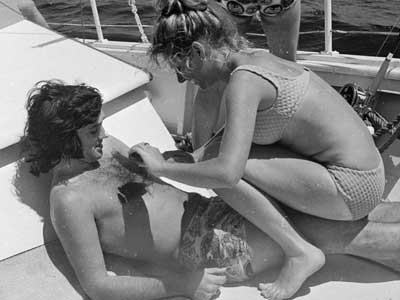 Best this morning at Salford Quays with his more usual calibre of cock-pocket.

Every Friday the Cutter raids the archives to bring you a story from football’s mucky past. This week it’s May 4th 1971.

The tabloid world was in shock last night after it was revealed that legendary lothario George Best slept with a ‘minger’.

Maureen Aitken from Aardwick, a secretary at a frozen chicken factory, revealed in a kiss-and-tell in the News of the Screws that she met an inebriated Best by chance in a Manchester hotel foyer.

‘He was very charming’ she cooed. ‘He told me he had a room booked upstairs but his latest Miss World had failed to show. And would I be willing to come off the bench so to speak’

Miss Aitken accompanied the dribbling rogue to his suite where he proceeded to play his favourite Dana records.

‘He really did want all kinds of everything. The man was insatiable! He teased and showboated a bit then cut inside with a blistering turn of pace.’

Best, currently dating beauty queen totty Eva Haraldsted, is noted for his philandering. But this is the first known instance of the winger romancing a ‘plain Jane’.

‘That’s what he called me’ she simpered. ‘He looked lovingly in my eyes…well, he tried to…and whispered that I was his plain Jane, like the one who will later be in Neighbours when it becomes popular twenty years from now’

Miss Aitken, who has mousey lank hair, dull eyes, and a rather biggish nose, is considering writing a book about her tawdry night.