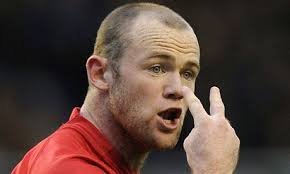 Manchester United has taken the dramatic step of filing a missing persons report on their AWOL striker Wayne Rooney.

The porky ‘best player in the world’ has been missing now for nine months and club officials are frantic as to his whereabouts. Following his non-appearance at last year’s World Cup they hired a crack team of private investigators, who dutifully trawled the nation’s brothels and fast-food outlets, but after a widespread search proved fruitless United then took the controversial decision to employ a look-a-like plucked from a local Sunday League outfit who happens to share the player’s unusual cranial deformity and gobshite demeanour. The paying public however are quickly cottoning on to this ruse and Ferguson himself is reported to have muttered to a sycophantic assistant ‘The lad’s fucking garbage. He’s so anonymous I often forget to even sub him. For all the good he does I may as well play a Portuguese tramp!’

The report states that Rooney is ’twenty-five years old but looks closer to fifty’, has ‘abnormally pale skin colour and angry eyes’, and that he shouldn’t be approached unless ‘accompanied by a grandmother in a catsuit or possessing something shiny to distract him’.

‘This is a very worrying case and we are conducting a thorough and painstaking enquiry to locate the young gentleman in question. If you have any information that could help us please do not hesitate to get in touch. Currently the only lead we have is the one Colleen uses to get about’.