Van Persie was controversially given his marching orders after following through with a shot despite the referee having blown seconds earlier for off-side. The Swiss official believed that the Dutch international was time wasting, a ludicrous decision that the incensed player later termed ‘a total joke’.

It now transpires however that it was not the roar of the Nou Camp that made him unable to hear the play being brought back for a free-kick. In a shocking revelation that will rock the sport Van Persie admits that since early childhood he has bravely managed to carve out a successful career in football despite secretly suffering from the disability of being profoundly deaf.

Using cockney rhyming slang, obviously picked up since his time in the capital, the player divulged all to Arsenal’s official website.

‘I’m totally mutt and jeff aren’t I. Have been since I was a little boy and got an infection in both of my King Lears. Until now only Monsieur Wenger and the lads knew about this but it is time the whole world knew, especially after the injustice I suffered in Spain.’

‘How could I be expected to hear the parp of the ref’s whistle when I can’t even hear the crowd? Or my own whinging voice.’

Van Persie then goes on to praise his team-mates for all their assistance in helping him deal with his life-long impairment.

‘Some of the lads have learnt bits of sign language, bless them, and it’s so unfair when our keeper Fabianski is accused of flapping at crosses. He is actually telling me the time.’

‘The gaffer has been unbelievable since I arrived from Holland and has been such a rock throughout all this. What with his dodgy eyesight and my ears we make quite a pair!’ 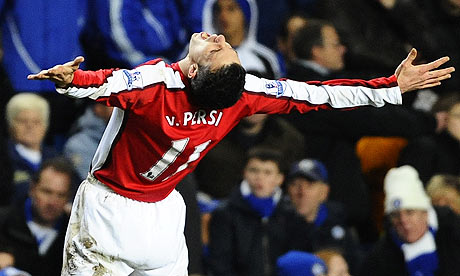 'Can you hear the Chelsea sing? I can't hear a fucking thing. Wooah'

‘Generally speaking it is not problematic playing professional soccer whilst being deaf as a post. My talent rises me above such matters and as long as my legs are in good shape, and my mouth can continue to spew out hate-filled opinions to anyone who will listen, then all is well.’

‘There was an occasion at Anfield a couple of seasons back when I scored and cupped my ears to pick up the vibrations of the away fans celebrating. The Kop thought I was mocking them and I got fined for supposedly inciting them. But those situations, and the one on Tuesday, are rare and it’s perfectly possible to reach the top despite having an impairment. It’s actually more common than you think. Tim Howard famously suffers from Tourettes and I’ve heard rumours that Emile Heskey has a club foot.’

The FA have yet to comment on this incredible development but it is thought they will pontificate for a while before doing very little for fear of being labelled deaf-ist.

An Arsenal insider meanwhile has revealed that Van Persie’s affliction has caused him considerable bother before, this time off the pitch.

‘There was that occasion in the Tulip Inn in Rotterdam in 2005. Robin was sure she was up for it and at no time heard her say ‘no’’