Reasons To Be Cheerful: The Weekend Starts Here

Or, more accurately, reasons to be excited, but as far as we know, Ian Dury and his blockheads didn’t write a song called that.

We are now firmly into the business end of the season, so much so that we’re way beyond the ‘squeaky bum time’ coined by Fergie and are now examining each fart to determine exactly who dealt it and who smelt it.

With only a small handful of fixtures left for each club, and a matter of weeks before the season draws to a close, it is easy for certain landmarks to pass you by as everything suddenly occurs at once.

Back in October a clash between the top two in any of the leagues would optimistically be termed a ‘six-pointer’ and the importance of the consequent draw for the away side would be hugely exaggerated. A ‘critical’ point? We all knew, with a multitude of games still to play, it was nothing of the sort.

In January an all-Premier League tie in the 3rd round of the cup elicited hyperbole to trouble the Richter scale as the media had us believe that this one single encounter would have a major bearing on events come May. Really it was just an entertaining spectacle in itself as neither team ultimately made the final.

Now however, all within the congested space of the next fortnight, promotions will be clinched, relegations endured, cups will be won, and titles secured.

It’s going to be hard to keep up.

So let the Cutter be your guide as we highlight the key fixtures to look out for over the coming days.

This is it people. The foreplay is over and the months of perfunctory thrusting have passed. Now sit back, buckle up, and ride out the shuddering climax of a sensational season.

Of the ten Premier league games this weekend incredibly there is only one that doesn’t have a profound impact upon the race for the title, a Champions League placing, Europa qualification, or the avoidance of the drop. Fuck you Sunderland v Fulham. Nobody is watching. Nobody cares.

Elsewhere today Tottenham’s trip to Stamford Bridge is undoubtedly the headline act and will garner the lions share of the media coverage but the Midlands derby between lowly West Brom and Villa should be a pretty tasty encounter too, with neither team home and dry just yet.

Watford v QPR 3pm – The hoops are virtually up anyway – Norwich’s 96th minute winner last weekend merely provided a technical halt to the official celebrations – but they can shut the mathematicians up this afternoon at Vicarage Road with a point or better. Warnock back in the top-flight providing plenty of post-match bluster? Bring it on.

Coventry v Reading – Reading can secure their play-off spot with a draw or better, though in fairness they are already in little danger of missing out. Unlike…

Notts Forest v Scunthorpe – With four wins in their last five games Forest seem to have rediscovered a rich vein of form just in the nick of time after an alarming slump. Their ten-game spell without a single victory however has seen them plummet from long-term automatic promotion contenders to stubbornly clinging on to the last play-off berth. Three points today will cement it but only if results elsewhere go their way. Otherwise it’s a nerve-shredding final day clash down at Selhurst Park against a Palace side who may yet need something to stay up.

Scunny meanwhile are in the proverbial last-chance saloon with a six point gap and a considerable gulf in goal difference to make up in order to pull off a miraculous survival.

It would be true to say they had nothing to lose if it wasn’t equally true to state that they have everything to lose. Expect an attacking approach right from the off and possibly a goal-fest at the City ground this afternoon as the Iron go forward in numbers only for their exposed defence to get picked off by a lethal Forest front-line.

Sheff Utd v Barnsley – A Yorkshire derby that’s full of grit, passion, and two-footed lunges at the best of times. With the Blades in exactly the same situation as Scunthorpe (six points adrift with a chasm of goals to fill) this has the potential to be an absolute cracker. Unless Barnsley score early and collective heads drop. In which case expect Bramall Lane to have the ghostly ambience of a lamppost on a busy A-road decorated with wilting flowers.

At least, should the latter occur, the Yorkshire TV cameraman will have ample time to pick out a suitably distraught young boy to zoom in on at the final whistle. A Birmingham lad gets told his dad is Lee Bowyer. Somewhere right now in Sheffield a young Blade is excitedly folding up his scarf. He will be mercilessly snapped in similar tormoil later today.

The frenetic battle to join Brighton in going straight up is now an enthralling duel between Southampton and Huddersfield. Meanwhile, at the other end of the table, a clutch of teams are still fighting for their lives.

Yet neither of these prolong scraps will be concluded this weekend and both are fated to be decided on an epic final day of the season (May 7th).

The play-off line-ups however could well be resolved today.

MK Dons v Notts County – MK Franchise will be guaranteed of a play-off spot should they overcome County. Even a point or defeat may be enough should Leyton Orient fail to beat Tranmere at home.

The Cutter is of course an entirely neutral organisation and would never dream of being partisan in such matters.

Come on County! Come on Orient! Let’s keep this plastic, soulless excuse for a ‘football club’ down in the lower echelons until that glorious day comes when they are rightfully usurped by a resurgent and reborn AFC Wimbledon.

Hartlepool v Bournemouth – Managerial rookie Lee Bradbury has admirably continued the excellent work done under Eddie Howe and the Cherries could yet achieve an incredible promotion double. Currently lying in the final play-off spot they have a three point cushion over their sole challengers Orient but with a huge goal advantage the south coast outfit realistically only require to match Orient’s result today to virtually secure that their season continues further into May.

Bury v Wycombe – Bury are already promoted but are still pushing hard for the title, which is a shame for Wycombe because they really could do without such an onerous fixture as they desperately attempt to scramble over the line themselves.

Currently Wanderers lie just one point above Shrewsbury with two to play apiece. A hard-fought win here, and a defeat for their promotion rivals away at mid-table Cheltenham, will mean a party atmosphere for their final game at home to Southend next weekend. Anything else and it goes to the wire.

Accrington Stanley v Barnet – A win for Stanley secures a play-off spot. A defeat for Barnet means they exit the football league. Expect frayed nerves and fingernails chewed down to the knuckles at the Crown Ground come 3pm.

Try telling these lot at Underhill how critical a European place is.

Northampton v Stevenage – Another game that pits a play-off contender with a club desperately striving to retain their existence in the league. Northampton are currently only one precious point above Barnet but, crucially, today they enjoy the advantage of being at home, roared on by their own supporters, whilst their survival rival are away. Next week, should it go to the final fixture, the roles will be reversed.

Stevenage meanwhile are amongst a group of teams scrapping for a play-off spot so won’t exactly be in charitable mood.

Liverpool will be hoping to continue their recent resurgence and exert further pressure on Spurs for fifth spot and a guaranteed Europa Cup place.

Whilst most attention will be at the Emirates there’s also a pivotal encounter between Man City and West Ham that has huge implications for both City’s Champions League quest and the Hammer’s fight for survival (see Rob Wilson’s preview beneath this feature).

Arsenal v Man Utd – One of the day of reckonings is finally here. For some time now United’s title aspirations has been quantified with the knowledge that they have yet to travel to Arsenal and take on Chelsea at O/T.

Yet, following recent twists and turns, most notably the Gunners’ spring implosion, this is no longer the title shoot-out we all anticipated. Now Arsenal need the three points to stay ahead of City for the automatic Champion’s League place. As Everton proved a few seasons back, by succumbing to Villareal in their qualification game, finishing fourth is no guarantee of a ticket to the big show.

United meanwhile now have a rejuvenated Chelsea breathing hard down their necks and defeat here will blow the title race wide open.

Portsmouth v Norwich – Across the border Cardiff take on Middlesbrough tonight. If they should get stage-fright and crumble then three points on the south coast will send the Canaries soaring back into the top flight. 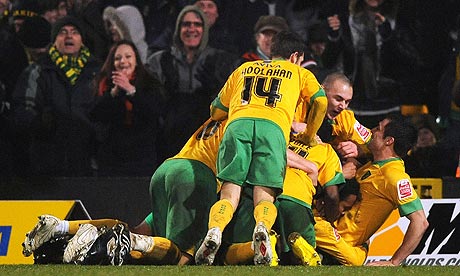 Plymouth v Southampton – If Huddersfield lost away to Brighton on Saturday (although the Seagulls appear to be demob happy of late and hungover from their Championship celebrations) then Southampton can secure automatic promotion this evening with a victory.

If results went against Plymouth on Saturday a defeat here means the cash-strapped Pilgrims are down.